Jeremy Citron is an accomplished personal injury attorney with extensive experience based in Atlanta, Georgia. His career has involved a variety of injury cases, including truck, motorcycle, golf cart, e-scooter, and trampoline accidents. He is an honor’s graduate from Georgia State University College of Law and has been a major contributor to the growth of some of the country’s most prestigious law firms—including acting as a founding partner for the Law Office of Stein & Ward’s civil litigation practice. Jeremy currently lives in Atlanta, Georgia and continues to found client focused personal injury firms like The Hurt Boss.

While at Georgia State University College of Law, Mr. Citron was an assistant coach with the mock trial teams. Jeremy’s history with mock trial teams and competitions dates all the way back to 1997 & 1998, winning their regional competition in 1998 and advancing to the national championship.

Mr. Citron began his legal career with one of the largest law firms in the country, Holland & Knight, LLP. As a commercial and civil litigator overseeing complex commercial matters, he handled product liability, personal injury and wrongful death cases. He received legal training and mentoring from some of the nation’s leading attorneys.

To pursue his passion for litigation, Mr. Citron joined the Law Offices of George A. Stein. He flourished as an associate and courtroom-tested trial attorney—even designing tools used by attorneys, prosecutors, and judges as a reference for the rapidly changing world of DUI law.

Mr. Citron’s proven track record and success in the courtroom makes him uniquely qualified and privileged to represent his clients. 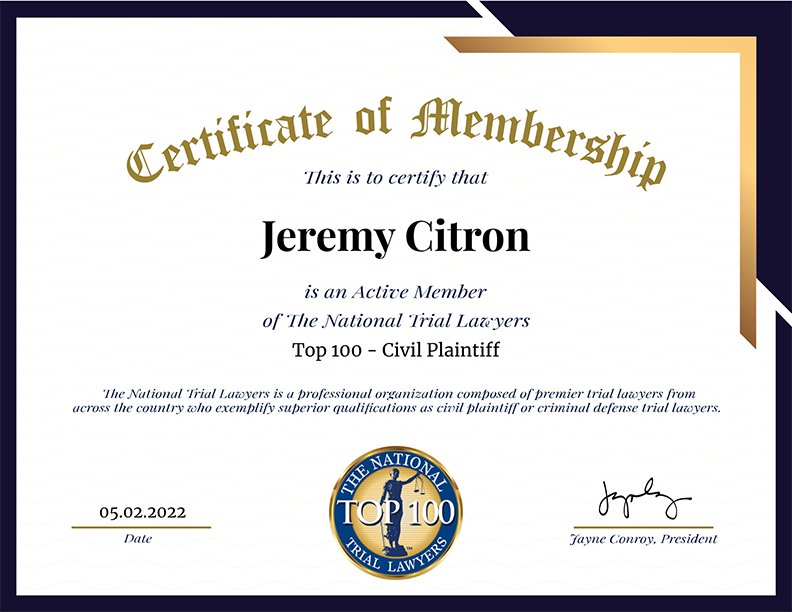 Hurt in an Accident?
Call The Hurt Boss